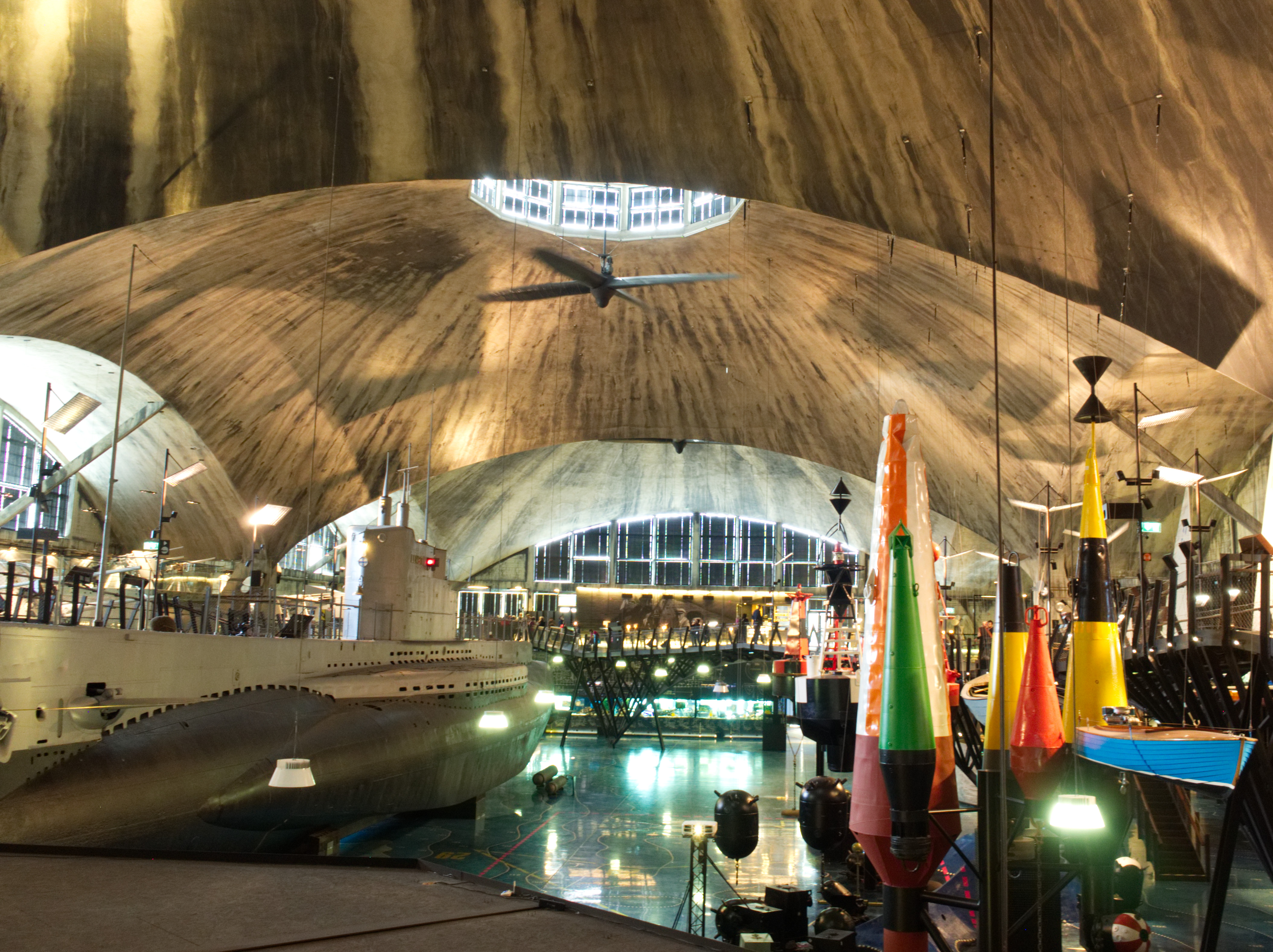 Far the greatest thrill at Tallinn’s Seaplane Harbour Museum, is the building itself. It has the vast, mysterious quality of a Ken-Adam-designed James Bond film set. Its scale and proportions are those of a modernist cathedral on steriods with a shadowy atmosphere to charge the imagination.

Standing on a strategic outcrop of rock in the Gulf of Finland, it comprises three vast, interconnected concrete domes, each large enough to house aircraft. The submarine that is the museum’s prize exhibit, is a minnow in this vast, sparsely-lit cave.

Contained within the 36m x 36m structure can be found traces of much of Estonia’s recent past. The seaplane harbour itself (as the hanger is known) was built from concrete to an innovative Danish design in 1916. With independence in 1919, the ‘harbour’ became home to Estonia’s fleet of Short 184 seaplanes. Manufactured in Belfast, supply of these came with the UK’s military support for the fledgling Baltic republic, one strand of British attempts to turn Russia’s revolutionary tide.

How effective were these open-cockpit biplanes at patrolling the Gulf of Finland is anyone’s guess. By the time the Soviet union annexed Estonia in 1940, the 75mph seaplanes were well past offensive usefulness. For the half century that Estonia was a Soviet Republic, the hanger became part of a vast military annex occupying much of Tallinn’s waterfront.

The Red Army sold the complex in a fleeting moment on the cusp of Estonia’s independence. There followed a bizarre nine-year dispute between the state and developers. The state triumphed eventually and a €14m transformation commenced, 70% funded by the European Regional Development Fund. It opened as a museum in 2012, and won the EU cultural heritage prize the following year.

The exhibits include an eclectic selection of maritime pieces. The ice yachts are beautiful and opened my eyes to an unfamiliar sport.  For a chilling transport into the lives the 32-man crew who steered its course beneath the waves, Submarine Lembit provides a memorable, climb-on-board, experience.

Built by Vickers in Barrow-in-Furness in 1936, it is the only remnant of Estonia’s pre-war navy. For much of its existence, it served in the Soviet navy and became a museum ship well before the collapse of communism.

The exhibits and installations distinguish themselves in two ways.

There is much that is interactive, from flight simulators, to shoot-em-up video games using real artillery pieces and a boating lake featuring a scale model of the ice-breaker Suur Tõll moored outside the museum.

And, the projection on the side of the submarine is as beautifully realised as it is thought-provoking – an object lesson in the imaginative use of an exhibit. The only pity is that there is little to signal that the projection is underway, with the result that many visitors apparently missed it altogether.

Moored outside the main building there are also a fascinating assortment of historic craft that provide further glimpses of Estonia’s maritime past.

Seaplanes no longer perform military roles and none of the Short 184s survived (although the museum does have a replica). Their former home, however, in an outstanding example of reinterpreted military space deployed to promote intelligent cultural engagement. For those seeking a contemporary example of swords beneficially repurposed as ploughshares, Tallinn’s waterfront is a great starting point.